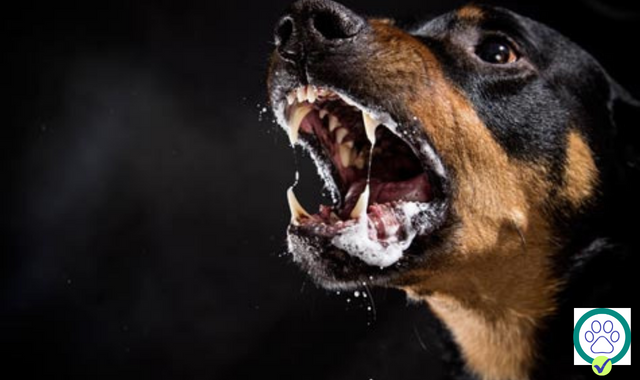 Rabies is one of the most devastating viral diseases in mammals, including dogs and humans. It is a fatal disease caused by infection with the rabies virus, a rhabdovirus.

Rabies is a well-known viral disease . It is rightly scary because it is transmissible to humans and there is no treatment  : it is always fatal. If it has become extremely rare in Western Europe, it has not completely disappeared from the surface of the globe because it is still rampant on the African and Asian continents as well as in Eastern Europe. Today, rabies is almost no longer talked about in France thanks to the vaccination of domestic animals and foxes. However, the risk still exists with the illegal importation of animals from countries at risk. France has been free of rabies since 2001, but occasional cases of rabies are reported in animals imported from infected countries.

How can a dog catch rabies?

Rabies is a disease caused by a virus. The latter, highly concentrated in the saliva of affected individuals, contaminates mainly through bites.
The rabies virus enters the body through the saliva of an infected animal that bites a healthy animal. Once installed in the muscles, it is introduced into the peripheral nerve fibers by which it goes up to the brain.

Rabies: symptoms and progression of the disease

The disease develops in three stages :
→a first phase of sudden behavior modification. Thus, the dog can become very aggressive and bite everything that is within reach. He can also be more apathetic or allow himself to be petted more easily.
→Then comes the phase of hyperexcitability : the animal is more sensitive to the slightest stimulus. Neurological signs develop: aggressiveness, dromomania (constant walking), hydrophobia (fear of water)... The rabid dog can ingest anything.
→The last phase is paralytic , with marked hypersalivation, depression and coma.
Death occurs by respiratory arrest around the tenth day after the onset of symptoms.

The diagnosis of rabies

The diagnosis is based on the animal's symptoms and its immunological status, that is, whether it has been vaccinated or not. Confirmatory diagnosis is made once the animal has died, by analyzing nerve tissue and seeking to measure the presence of antibodies against rabies.

What treatment for rabies?

There is no cure for rabies, either for humans or dogs. The best prevention remains the vaccination of animals, compulsory in France for those who travel.
Some countries have also succeeded in eliminating rabies from their territory by vaccinating wild animals. For example, in France, foxes are considered potential carrier animals and a vaccination program with baits is in place to protect them from the virus.

Vaccination therefore remains the surest way to prevent the disease in dogs. This vaccination is practiced in a single injection from the three months of the puppy. This vaccination is effective for one year and must be subject to annual booster shots or every 3 years depending on the vaccine used, which can be reimbursed by your company.
Rabies vaccination is compulsory for travel outside mainland France (Reunion, Martinique, Guadeloupe included) and for animals subject to the law on dangerous dogs. It can be requested by the organizers of canine gatherings (puppy school, canine education center, canine competitions, greyhound races, etc.), by managers of public places (campsites, holiday centers, etc.) or even in kennels. and pensions, but these are individual precautionary measures, not made compulsory by French legislation.
Since 2008, an anti-rabies vaccination, to be officially recognised, must be recorded on the animal's European passport. This passport is issued by your veterinarian during his vaccination.
Tags
HEALTH
Related Article